5 Midlands eateries worth visiting on your Meander

With its rolling green hills, lush pastures and winding country roads, it’s easy to see why the Midlands is a firm favourite with many South Africans. Beginning in Hilton, the Midlands Meander route spreads northwards; it now encompasses over 150 stops at artisans, eateries, pottery sheds and even a winery! With a spoil for choice of where to eat I set out to try some of the old favourites, and some newbies. These are my top 5 Midlands eateries:

Hartford House must surely be the pièce de résistance of KZN dining experiences. I couldn’t have been more spellbound by the culinary journey offered at this Midlands establishment. I’d wanted to visit only for dinner, but the adjacent boutique hotel offered so many merits (and breakfast the following morning) so a stay-over was imminent.

The programme begins with drinks served in the various rooms of the elegantly furnished manor house, and at 8 PM the magic begins. The hugely-talented Chef, Constantijn Hahndiek develops a brand new menu every day! This freedom afforded to him means that you’re always in for a surprise and his culinary mastery is both a taste and visual journey.

The ingredients are locally-sourced, complemented by the seasonal offerings from the property’s gardens. (The 140-year-old plum tree was fruiting and so parts of our evening meal incorporated its tantalizing tartness.) It’s no wonder the restaurant is a previous Eat Out Awards Top 10 winner, and last year the only KZN restaurant to be nominated.

Have you ever left a restaurant craving one more meal from the chef? An overnight at Hartford means you’ll get your wish: a stay on one of the Midland’s most charming farms and a delicious, hearty country breakfast.

Only a minute off the N3 highway, at the Nottingham Road turn-off, you’ll find this brand new (rather exciting) dining option. The Midlands Kitchen is exactly that. It is a giant kitchen in the heart of the Midlands, offering food from fifteen different mini-kitchens. Guests can wander around the hall, spoilt for choice with wood-fired pizza, organic burgers, artisan pies, chicken choices, local curries, Mexican and Middle Eastern. There’s even a dedicated vegan selection, as well as a make-your-own smoothie stand.

You’re offered three dining options: a straight take-away, quick-eating tables or a more formal sit-down option where waitrons collect and bring your order. With meals from R50, the prices are as accessible as the variety. Make sure to collect a take-away coffee from Exit 132, and home-made ice cream from Wild Child (the tiramisu is to die for). See it as a healthier, more diverse roadside diner, inspiring the palate without breaking the bank.

An Austrian headmaster was posted to the areavand missed his foreign favourites so much that he started The Bierfassl. 20 years later The Bierfassl has established itself as an iconic Midlands eatery, offering the finest Austrian fare for miles. Chat to any local and they’ll probably recall a visit to the restaurant and tavern – either for special occasions, or simply a hearty lunch. They’re best known for their crispy eisbein which comes in several portion sizes. I opted for the ladies’ portion — I still had enough ham for the following day’s sandwiches.

It’s best to also arrive thirsty: there are plenty of tasting options. A partnership with Notties – the local brewery – means you can have taster trays of eight of their craft beers. They even have a gin taster paddle to complement the eisbein. Be sure to visit the little deli on your way out for favourite Austrian treats.

SPECIAL?? Get a regular size Eisbein with a 500ml Erdinger Weiss beer for R 159.00. Available while stocks last!

Terbodore have already left a firm caffeine print in the Cape Winelands and surrounds, and discovering that their home base is in the Midlands, I had to pay a visit! Originally from the Cape, the owners moved to the Midlands and were instrumental in growing the now-successful Caversham Mill. Over the years coffee was being sourced from the Cape, until they decided to give a go at roasting their own. Fast-forward to 2004 and the first beans were brewed.

As anyone will testify, the coffee is superb; but let’s be honest, the cinnamon and walnut baked cheesecake has to be the best on the planet. They also serve hearty breakfasts and lunches in a lush garden, or the modishly-renovated indoor space. Terbodore has quickly become one of the most popular Midlands stops – so much so that it is highly advised that you phone ahead to book a table. Don’t forget to take home some coffee and greet the Great Danes who are the ever-proud mascots of Terbodore Coffee.

Pietmaritzburg may come across as the rather tired and neglected capital of KwaZulu-Natal, but she has some wonderful surprises. One of these is the quirky and delightful Rosehurst café. Travelling down Boom Street, you may doubt that such a treat actually exists in the town, but trust me: she’s there. You’ll first walk through the rather eclectic house where every room stores various trinkets and collectables, but as you exit the back you enter what can only be described as the “secret garden”.

Despite being in the middle of the city, the garden cleverly conceals the urban surroundings. You’re given a little green oasis in which to enjoy your coffee and cake, while assorted sandwiches and light meals are also on offer. My suggestion? Take a good book with you and find a corner of the garden to sit and enjoy the peace and quiet. If for some reason you find yourself in the city, be sure to pay a visit to Rosehurst and allow its charm to add a surprising smile to your face. 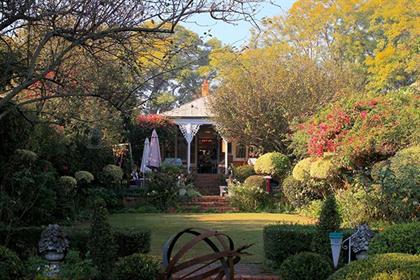